STAY IN THE KNOW
THANK YOU!
Get news, design trends, inspiration and offers before anyone else!
Sign up for our newsletter and get 20% off posters next time you shop!
An email with your discount code has been sent to your inbox.
GET DISCOUNT
Please enter a valid email address
|
Go back
Asia
Europe
North America
Oceania
SHIPPING COUNTRIES
At desenio.com we ship to the following countries: Bulgaria, Canada, Croatia, Cyprus, Estonia, Greece, Hungary, Japan, Latvia, Lithuania, Luxembourg, Malta, Romania, Slovenia, South Korea and United States of America. 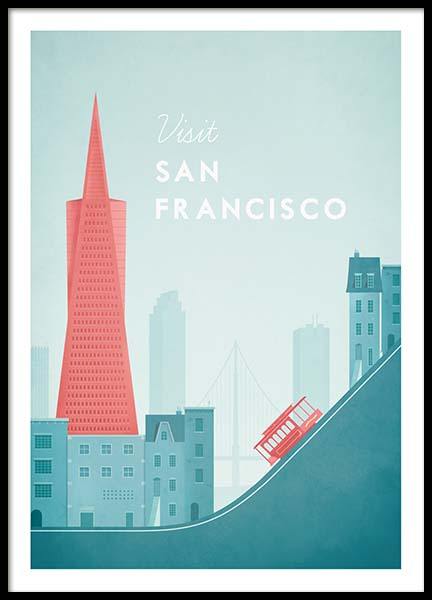 Handpicked design Modern print with design created by Henry Rivers. Consisting of some of San Fransisco's most well-known landmarks paired with the words 'Visit San Fransisco', this chic graphic poster takes its inspiration from the famous city. We carry several posters with motifs by designer Henry Rivers - browse the Maps & Cities category where you will also find lots of other modern prints with designs and texts highlighting various cities. The poster comes with a white border that nicely frames the design.
pre0014
Frame not included

Not included in discounts and deals

Illustrator Henry Rivers is originally from England, but currently resides in a small town in the French countryside, close to Bordeaux. Henry travels the world with paper and pen always at the ready, with the goal of capturing the soul of the world's most loved cities and places. With a background in architecture, and inspiration in the form of retro travel advertising, he creates colorful posters through his interpretation of our favorite destinations in a minimalist style.

Through research and world travels, Henry Rivers reproduces famous monuments, landmarks, and icons from some of the best travel destinations in his art. Rivers' playful expressions and beautiful colors are the perfect union of vintage elements and modern art.

We have saved the products so that you can find them easily again.

This is what our customers say

Read about our sustainability work

Quick and safe with card or Paypal

We use cookies and tracking to provide you with the best experience of our website and for marketing and statistical purposes.

Some cookies are necessary for the website to work, for example those that allow products to be added to your shopping cart, while others help us to improve your experience and the experience of others by analysing how the website is used. The tracking may also be used for associating our visitation information with other platforms such as for example Google, if you have consented to that with the other platform. Read more about the cookies we use and how we process data in our Privacy Policy and under Cookies Information. You are able to block cookies by changing your browser settings.

We have cookies that store information on the products you have viewed and added to your shopping cart. These can then be used to personalise ads on other websites or for sending service emails to you when, for example, you leave the site with items still in your shopping cart. You can unsubscribe from emails at any time via the link at the end of the email or at the bottom of this page.

Add to your gallery wall

Do not show again

has been added to your ItemWatch. You will receive an e-mail as soon as it is available in the store.

Last day to order before Christmas per country:

You have now activated your gift card. The value will be deducted at checkout.
The gift card code has now been removed. Use the link in the email to reactivate it.
Continue shopping
Remove gift card

No more products to track

Search for a specific location, either by typing in an address or by dragging the red cursor on the map. Once you have selected your location, click "Set these coordinates to confirm and continue.

Unfortunately we are currently unable to deliver to this address. Please try another address and post code.

The discount code will be automatically applied at checkout, it is valid until CET.
*Does not apply to handpicked/personalised posters and frames.